Want to Open a Bank Account in Ukraine? Read this first! 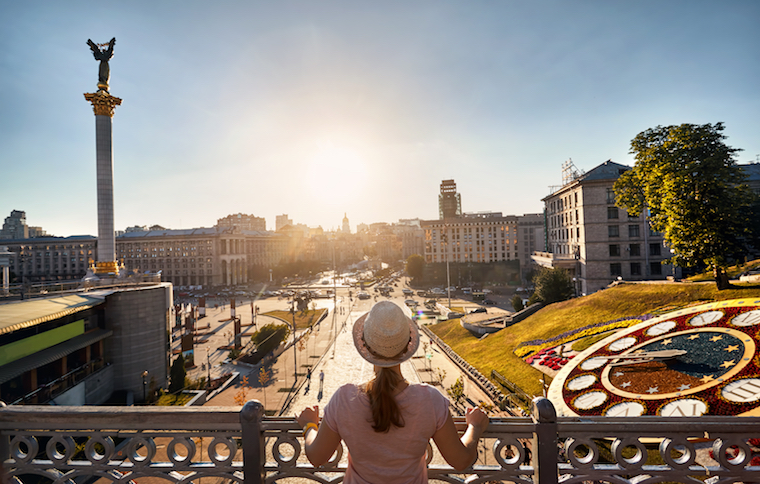 Most locals go to great lengths to avoid banking in Ukraine.

In fact, Ukrainians with the wealth and means, park their cash outside of the country.

In short, banking in Ukraine can be one hell of a rollercoaster ride.

So why would we even consider writing an article about banking in the country?

First, because we still get questions about banking in Ukraine from our premium members. So we thought we’d share our thoughts on banking here with our readers.

Second, despite all the corruption, lawlessness, Russian aggression, and economic dependency on international handouts, things are changing… slowly. Very slowly.

If you’d like to get started opening accounts in Ukraine as a non-resident then download our FREE Non-Resident Banking Starter Guide right now!

In 2014, the Ukrainian government collapsed. That triggered a banking crisis. The local currency, the hryvnia, spun out of control.

And from 2014 to 2015, nearly 62 Ukrainian banks were declared insolvent and stripped of their banking licenses.

Within a year, 12 more banks failed. And 14 banks were so rickety that the country’s central bank put them under temporary administration.

By the end of 2016, the government nationalized the largest bank in the country to “save the banking system.” And, even that was wrapped up in a scandal.

This is why we’re so adamant that non-residents take the financial and economic factors into consideration before they start banking in a foreign country… after all, bad things can happen.

But economic collapse and banking failures aside, Ukraine has other problems…

High levels of distrust and a massive lack of confidence permeate the Ukrainian banking system.

We call it the Ukrainian shuffle…

Insolvent zombie banks would go under, have their licenses revoked… and then magically reappear.

Get a bank, run it into the ground, take all the money → authority declares bank insolvent → get a court to overturn the decision → have your bank declared solvent again!

It was a surreal practice. And, it was common.

So common in fact, that in 2019 the IMF refused to give Ukraine any money until they changed their banking law.

And since Ukraine is effectively propped up by the IMF… they didn’t have much of a choice.

Or, as a local Ukrainian friend put: “Banks are not stable here. There is no guarantee a bank will be alive in a  year.”

Why Is Ukrainian Banking So… Bad?

When the Soviet Union broke up in 1991, Ukraine gained independence, and opportunities were everywhere.

Immediately, officials set up a central bank (NBU), slapped together a brand spanking new banking law, and broke up the country’s one and only “State Bank” into five little banks.

It was a classic post-soviet maneuver… every country did it. It’s almost like someone distributed a post-soviet banker’s handbook.

But there were a few problems…

The banking law didn’t have any of the normal rules you’d expect, and it was very short on details.

The requirements were slim. No reporting was required. And everyone and their uncle wanted a bank.

What could go wrong?

Ukraine was the wild west of banking.

So with all of this questionable behavior and loose banking regulations, why would anyone want to bank in Ukraine?

Well, depending on who you are, there are actually some really great reasons… let’s take a look. 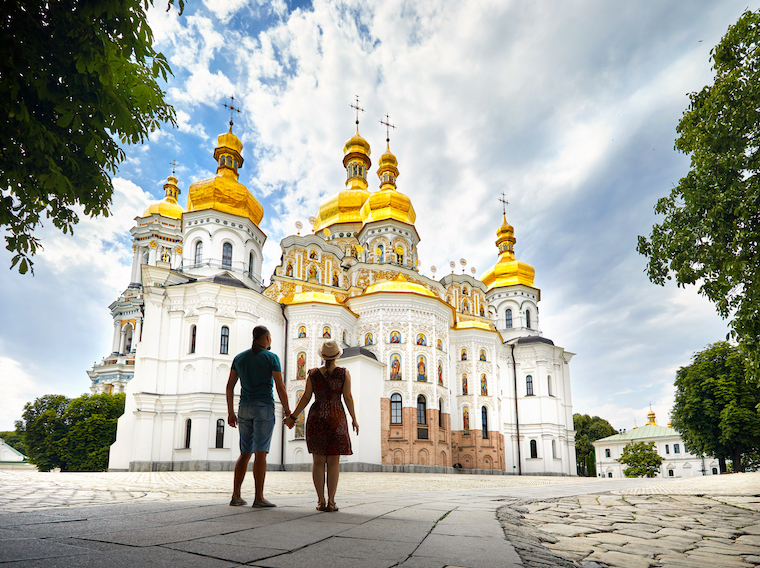 Unlike many of the European nations we cover on GlobalBanks, Ukraine is not in the European Union. So it’s not going to act as an entry point for foreigners and non-residents looking to open EU bank accounts.

If that’s what you’re after, you should check out Poland, Bulgaria, Hungary, or Lithuania.

Of course, there are other options to consider. But if you’re looking to open a bank account in Ukraine, these countries might be a safe starting point.

Yes, there are banks here that offer benefits to account holders. In fact, there are banks in Ukraine that can help you expand your international banking footprint well beyond the country’s borders and into major European hubs like Austria or France.

However, no matter which bank you choose, you should keep your deposit to an amount you don’t mind losing…

When it comes to Ukrainian banking, there are two groups that open accounts here…

Well, if you live and work in the country, you might have to open a bank account in Ukraine.

After all, it’s common for Ukrainian companies to only pay employee salaries to local accounts. So, getting paid via Revolut or your international bank isn’t going to work.

Plus, sometimes just having a bank account in Ukraine makes life easier– especially when you have to pay for things like paying for utilities, cars, apartments, tuition, etc.

Here’s a quick snapshot of some groups who typically open bank accounts in Ukraine:

Group #2: The NOT So Usual Suspects

The second group is hunting for opportunities and raw utility. Basically, this crowd sits back and says, “if I open a bank account in Ukraine, how can I use it to improve my life, achieve some obscure goal, or make money?”

Warning: When buying fixed deposits (or CDs) in Ukraine, they’ll be denominated in hryvnia, US dollars, and euros. But, be careful. Even though you can earn 16%+ on a fixed-term deposit in hryvnia, Ukraine’s inflation rate is just as high. This will destroy any profit and you might end up losing money depending on inflation at the time.

We’ll share more specific benefits for this second group inside GlobalBanks Insider, unlocking the increasingly valuable benefits that the banks in Ukraine can offer.

Challenges if You Open a Bank Account in Ukraine 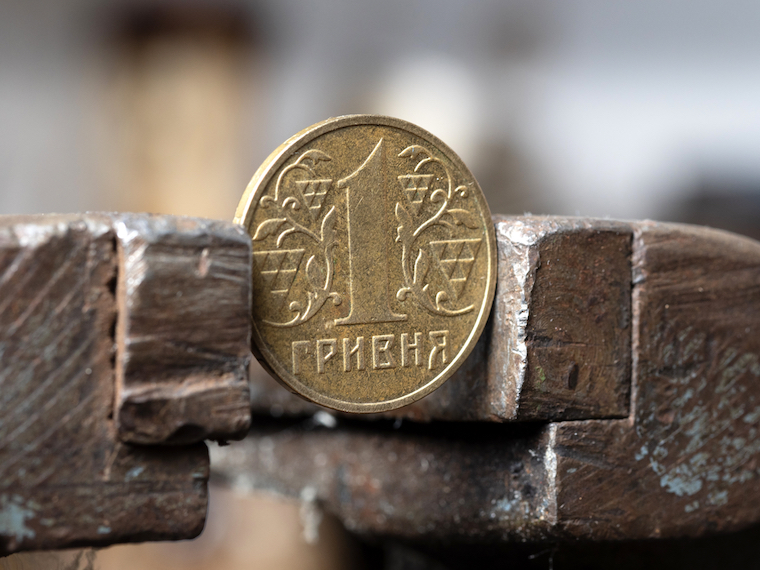 Besides everything we’ve already mentioned above, foreigners and non-residents trying to open a bank account in Ukraine often find the process frustrating, time-consuming, and complicated.

Here are a few specific challenges to watch out for:

When opening a bank account in Ukraine as a foreigner, the rules vary from bank to bank and branch to branch.

Some banks will reject foreigners because they don’t have the right visa, tax ID, or local work contract. Other banks refuse foreigners who are citizens and residents of certain countries.

Each bank also has different administrative procedures. Some want all your documents to be notarized and translated into Ukrainian by a certified translator. Others are much more lenient.

The bank, branch, and banker you choose can drastically simplify the opening process, so choosing the right combination is key. It’s the difference between a multi-day slog, repeated rejections, and time wasted acquiring unnecessary paperwork (e.g. tax IDs, visas, etc) and opening your account on the spot.

Some Bankers “Can’t” Open for Foreigners

Some bankers will say “we can’t open bank accounts for foreigners.” But this isn’t always true. Typically, this phrase just means “I don’t want to help you, so please go somewhere else.”

It’s up to you to decode each banker’s language and figure out what’s real and what’s not.

Read the situation wrong (or say the wrong thing), and you’ll waste a lot of time banker hunting and branch hopping in the account opening phase.

As a GlobalBanks Insider, you’ll get the specific banks, strategies, banker contacts you need to open accounts in Ukraine without headaches.

If you’re opening a bank account in Ukraine as a non-resident, watch out for extra transfer restrictions.

For instance, you can’t receive payments from any Ukrainian bank account if you don’t have a permanent residency. Your account can only receive SWIFT transfers.

With temporary residency, you cannot legally have money transferred into your account unless the person or company transferring it deducts 19% in taxes and follows specific procedures to show the origin of the money.

We do not recommend that most people or businesses open a bank account in Ukraine.

There are simply better (and safer) banking options available elsewhere.

A Ukrainian bank account, however, can still be an interesting banking option for certain types of people.

For example, it might be a nice “backup” banking option for people who are struggling to open accounts elsewhere, who have an unlucky passport or residency, or who just desperately want a non-resident bank account somewhere in Europe.

Still Want to Open a Bank Account in Ukraine?

If you’re still looking to open a bank account in Ukraine, find that your current banking relationships are hitting a wall, or are struggling to sort out your banking options, we can help.

If you want to know which specific banks will accept you, which account opening strategies to use, the best ways to avoid high fees, and overcome obnoxious paperwork requirements, then we’d be happy to help you on your journey.