Ever try opening a Lithuanian bank account as a non-resident?

Spoiler alert: You probably already have one.

Have a Revolut account? Then, congratulations– you’re banking in Lithuania.

Until recently, Lithuania was just a smudge on the banking map. But, almost overnight, it became a non-resident banking powerhouse.

While everyone was obsessing over Transferwise and Brexit, the Lithuanian authorities decided to buckle up, take the “red pill,” and become fintech disruptors.

Who would’ve thought… a little post-Soviet country in the Baltics would end up creating the most attractive fintech licensing scheme in the world?

And with it, opening up the ultimate backdoor to EU banking for non-residents and fintechs.

And now, Vilnius is spitting out licenses faster than London. There’s even a waiting list.

In this article, we’re going to explore Lithuanian bank accounts for non-residents, why they’re useful as a banking tool– and how you can use them to access EU banking.

We’ll also dig into the benefits, how to open accounts, the pitfalls most people fall into when opening… and a few areas where you need to be extra careful!

If you’d like to get started opening accounts in Lithuania as a non-resident then download our FREE Non-Resident Banking Starter Guide right now!

For almost 50 years, the now-independent nation was part of the Soviet Union.

Lithuania gained independence in 1990, joined the EU in 2004, adopted the euro in 2015, and then things took off from there…

Tired of having sluggish Scandinavian banks dominate their financial sector, authorities and locals got creative and did something new.

In a nutshell, they said, “Hey, fintech world, come to Lithuania and disrupt Europe from here.”

Then, something crazy happened… it actually worked.

Result? Vilnius is now the fastest-growing fintech hub in Europe, second only to the UK.

Even British fintech firms are flocking to Lithuania…

In fact, Lithuanian authorities positioned the country as a “gateway to the EU” for fintechs and non-residents… and that’s where non-resident banking starts to get interesting.

Unlike traditional Lithuanian banks that cater to residents, many Lithuanian fintechs welcome non-residents and high-risk customer segments that struggle to open accounts elsewhere.

But, as we’ll see in the next section, you need to approach Lithuanian banks carefully.

Can You Open a Lithuanian Bank Account as a Non-Resident?

But, opening a Lithuanian bank account for a non-resident is still 100% possible.

If you have the right information going in, know which banks (and bankers) to target, and know what to watch out for, account opening can be a breeze.

But remember… it’s a very sensitive time to open non-resident accounts in Lithuania.

Non-resident customers, Russia, and outdated AML & KYC were at the heart of those scandals.

Prepare yourself for rejection. There’s a chance you’ll be sent away by several branches and bankers.

And, the moment you announce that you’re a non-resident, non-EU citizen, or have a foreign company, you’ll either be seen as a pariah or get hit with an onslaught of paperwork and questions.

If you go to the wrong banks, you’ll get hit with higher fees and other restrictions that actually discourage non-resident deposits– such as high opening fees, monthly maintenance fees, and annual account fees.

But despite all the headaches, Lithuanian bank accounts can still offer value to non-residents…

Why Open a Lithuanian Bank Account as a Non-Resident? 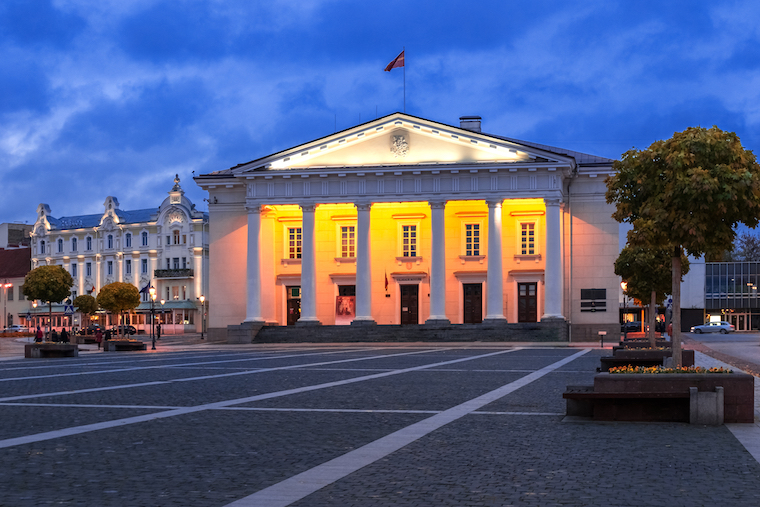 If you’re a non-resident, opening a traditional bank account in Europe can be difficult.

And, if you’re not an EU citizen and you don’t have a local proof of address, work contract, or the correct visa– odds are, the bank will reject you.

On top of that, if you have a non-resident company from outside the EU, opening a bank account in Europe is nearly impossible.

Here are a few examples of the groups that can benefit from Lithuanian banking:

Additionally, launching EMI & payment institutions in Lithuania is incredibly cost-effective. The costs are a fraction of what you’d pay elsewhere, at around $350,000 and up.

Non-residents opening bank accounts in Lithuania are going to face challenges. But you know that. If you’re banking as a non-resident, you’ve probably come to expect that.

Let’s look at the account opening challenges you can face…

If you need the account for transfers in Lithuania you should check which type of IBAN is tied to the account. Some Lithuania banks still require Lithuanian IBANs. That means, all those foreign EMIs you have won’t work and you’ll need to find an institution with a local IBAN.

Be careful. Many introducers will charge $1,000+ to “help” you open a Lithuanian bank account as a non-resident. The dirty secret? You don’t actually need an introduction. You just need to know which banks to go to.

Yes, Lithuanian fintech is booming. That doesn’t change the fact that EMIs and payment solutions are risky…

Thanks to low capital requirements and easy licensing– we’ve seen EMIs go under, lose their licenses, and get hurt by compliance issues.:

Some providers resell and white-label services from other EMI and payment institutions. In fact, it can be difficult to tell the difference between a white-labeled solution and the real thing.

And before opening accounts, conduct your own due diligence. And whatever you do, make sure that you’re opening an account with a regulated and properly licensed institution– not a straw house.

Ready to Open a Lithuanian Bank Account as a Non-Resident?

Fortunately, if you’re a non-resident looking to open a Lithuanian bank account or sort out the European banking options available to you, we can help.

If you want to know which specific banks will accept you, which account opening strategies to use, how to avoid high fees, and overcome tough paperwork requirements, then we’d be happy to help you on your journey.

When you join GlobalBanks, you’ll also get instant access to our entire archive of Banking Intelligence Reports. These include proven strategies for opening accounts. We share contact information for specific banks and bankers. And to make sure you don’t waste time, we provide details on each bank’s preferences, sensitivities, and more.